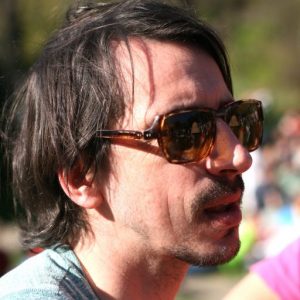 I am an associate professor at ETIS research department, a research facility with french Centre National de la Recherche Scientifique (CNRS), ENSEA Graduate School and CY Cergy Paris University, and an artist-researcher affiliated to the Design Research group @ ETIS/CY Ecole de design. I am especially active in  the field of Science and Technology Studies (STS), my main focus being on “Art & Science“ interactions, artificial creation, Art and AI, Philosophy of Technology and new governmentalities induced by AI. I’ve also had a long career in pop music alongside.

Artistic approach. Whether as an artist or as an academic, but always as a researcher, I’m trying to shape a critical corpus of our relation to so called “augmenting” technology and decision algorithms. My approach thrives on a sensitive conversation between art and autonomous machines that investigates the ambivalence of postmodern subjects in their relation to technology, in effect leveraging on the concepts of actes manqués, anthropological invariants and Stiegler’s ephilogenetic memory. Traces, unspeakable legacies, and multiscale approaches form the core of my work. I’m making use of various mediums, from interactive electronic & robotic installations to tailored-made sound devices to performing arts.
The concept of digital gestures in particular, that is, gestures linked to digital craftsmanship (coding, PCB design, 3D CAD, …) is central to my practice, with bugs and faults – both inextricably linked to digital technology – figuring an extra medium in itself. In this respect, my work indirectly draws from hacking and circuit bending subcultures, but also relates to the dialectic between intimacy and universality that is so deeply rooted in the concept of gesture.

Academic methodologly. My academic work makes use of tools from moral philosophy and psychoanalysis, with a focus on works by Gunther Anders, Ernst Bloch, Gilbert Simondon, Bernard Stiegler and Roland Gori. My recent works and publications revolve around ambivalence and actes manqués in our relation to technology with the question subjectivity being a permanent “mantra” in my research.

Collaborations. I’ve had numerous collaboration with other artists in the last decade, including Olga Kisseleva from Institut Acte (Sorbonne), Eric Maillet (through the Cycle & Recycle research project), the Cantierezero collective, Ooze architects, …. My work in collaboration with Kisseleva has been exhibited at Art Paris, FIAC, Louvre-Lens, Ekaterinburg biennal for industriel contemporary art, HKW Berlin and Moscow Laboratoria for Art and Science. I closely collaborate with philosopher Giovanni Leghissa from the department of philosophy and education science at Università di Torino. I’m also happy to give lectures to the general public on philosophical issues regarding artificial intelligence, robotic and transhumanism.

Pop. I have also been a member of several pop music projects signed to various indie labels, including Pink Noise Party (Z-Records, Playground UK) and Anechoic Chamber (New Rose/Lively Art). I have released six records and given more than a hundred shows in Europe and in the UK. I created the first ever submarine pop show on the Black Sea for Balaklava Odyssey 2010 Media Art and Performance Festival.

Physics. I completed a PhD in theoretical physics at Laboratoire de Physique Théorique et Modélisation. I’m also holding the french Agrégation grade. I originally graduated in EE along with an undergrad philosophy cursus. I taught quantum physics, quantum information theory and dynamical systems at graduate level for a long time in the past before switching to social sciences and philosophy.

Send me an email: reynal at ensea dot fr